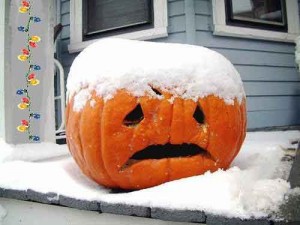 It was two days before Halloween, and we picked up a record-breaking snowfall.  Now all the little ghosts and goblins will be running around in winter boots and ski pants! I thought this might be an appropriate time to discuss whether snow really is the proverbial “poor man’s fertilizer”. 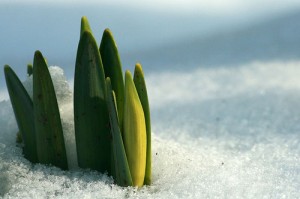 The short answer is yes. Whether falling on your daffodils in April, or on your jack-o-lanterns in late October, snow contains nutrients which benefit plants and soil. Folks have known it for a long time. Many an old timer made a point of plowing his fields right after a spring storm. Nitrogen of course is the primary nutrient we’re talking about, and it’s not just in snow, but rain as well. In fact, studies have shown rain actually has a higher proportion of nitrogen, but even moderate rain tends to quickly saturate soil and run off. Snow gets the top billing because it melts gradually, and is theoretically a slow nutrient feed to the ground beneath.

As every school kid knows, the atmosphere is 78% nitrogen gas (N2), which is a compound made up of two bonded nitrogen atoms. It’s an easy to assume the N2 is what comes down to the ground in precipitation, but that’s not quite right. Nitrogen exists in numerous forms, and N2 isn’t directly usable by plants. It needs to be first converted, or “fixed” into mineralized nitrogen forms.

For that matter, what we call “organic” nitrogen, the nitrogen in organic material, crop residue, and animal waste (urea or manure) also needs to be converted before it can be taken up by plants.  Many natural processes are at work in our environment, fixing and transforming nitrogen. Manmade processes are a major  factor too. Industrial production of fertilizer, ie the process by which nitrogen gas and oxygen are fixed to form ammonia, has become a significant part of the planet’s complex nitrogen cycle.

Getting back to snow and rain, so it’s not N2 per se which is captured, but rather suspended nitrogen compounds like nitrogen oxides, nitric acid, and especially ammoniacal nitrogen. These compounds find their way into the atmosphere from the burning of fossil fuels. It is estimated that since the industrial revolution, the nitrogen content of precipitation has increased dramatically. Who says pollution is all bad? Lightning produces significant quantities of nitric oxide. All of these nitrogen compounds (which are more immediately useful to plants than N2) are deposited on the soil at an estimated rate of 5-10 pounds per acre, per year. The concentration of nitrogen in a given precipitation event varies. The compounds tend to accumulate in the air during dry periods, and then wash out in heavy or prolonged rains. Perhaps that’s why the grass looks particularly green when a thunderstorm breaks a summer dry spell. You have the built-up concentration of emitted nitrogen, plus what’s produced by the lightning. A double whammy!

To put it in perspective though, 5-10 pounds of acre of nitrogen from snow and rain is not much to a modern day farmer or gardener. Consider that a robust legume cover crop can biologically fix over 300 pounds of nitrogen per acre, and chemical fertilizer is applied at a rate of 130 pounds per acre minimum. Poor man’s fertilizer indeed! Of course, I’ll take all the free fertilizer I can get. I’m not betting the farm on it though.