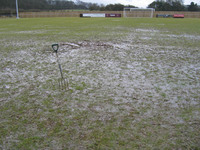 A number of factors contribute to the success in a sports pitch drainage programme. Installing and maintaining a system is an expensive undertaking. A complete system, incorporating slit drainage and sand dressing, can amount to in the region of £25000 to £30000. Negligence in just one area can jeopardise the entire investment. The following myths are worth considering:

Amelioration of clay loam topsoil by mixing in 30mm to 50mm of sand (400 to 600t) into the top 50mm of the topsoil surface improves the drainage of the pitch.

False. Developing what amounts to a 50/50 mix of heavy loam soil with sand creates a still relatively impermeable layer of sandy loam material, which no longer expands and contracts as clay does. It compacts easily into a hard crust after play in wet conditions.

To achieve satisfactory amelioration in a sand carpet or complete rootzone, the sand content must be at least 80% to create adequate non-capillary porosity, and so permit drainage to lower layers without the fear of compacting. Furthermore, unless the organic matter content is contained in these improved rootzones, the infiltration and consequent surface drainage potential will reduce. 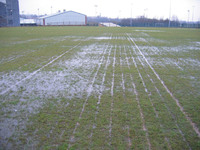 False. Invariably, drains are installed prior to final levelling and seeding. Besides contamination at the surface with fine particles, even this spacing is too great to remove surplus surface water before it enters the surface and develops localised wet areas. Below the soil, surface water moves very slowly laterally – too slowly to reach drains at this spacing. Irrespective of the gradient of the pitch, low rainfall promotes little run-off, and the distance between laterals is too great for water movement to overcome the resistance of the grass growth and the micro-depressions that will retain surface water.

A pitch can be over-drained.

False. Only surplus water moves from saturated soil into trenched pipe drains. Water is held far more strongly by the clay loam topsoil and clay subsoil than the porous aggregate in the drains. There can never be an attraction/suction of soil water from soil to sand aggregate. The argument that retaining the surplus water makes it available at times of water shortage cannot be supported. Water lost downwards into the subsoil cannot move readily up through the topsoil during times of need.

False. Surface water must be able to move laterally over the surface to reach slit drains, and there should be adequate gradient in a single cross-fall or on either side of a camber. Average rainfalls of around 5 to 12mm per 24 hour day hardly promote surface movement over relatively flat surfaces, and water will accumulate and be lost only be evaporation. Undulating pitches will promote run-off to depressions.

Initially, slit drains will take in the surplus water in these depressions, but the wetter conditions created in these locations will make the surface softer. They will be more subject to deformation from play and prone to collecting silt containing water run-off that, in time, caps off the opening in slit drains and nullifies their effectiveness.

French drains or pipe drains, with pea gravel to the surface, will control surface water moving down cut slopes on to the pitch.

False. Water run-off moving down a cut slope will always contain silt passing over the soil surface. This continual silt content will eventually blind open drains, temporarily sealing the surface. It is just a matter of time before grass growth covers the silt covered aggregate. Furthermore, at times of high intensity rainfall, surface run-off will not stop at drains to gain entry – water flow will simply find its way on to the pitch. A manageable solution is the creation of a shallow mowable swale at the toe of cut slopes with a pipe drain installed in the invert of the swale.

False. It is vital that the gravel and the sand are chosen with the particle size distribution of each material being such that the acceptable bridging factor is attained. Fine particles in the sand moving down into the gravel soon restrict the drainage performance by occupying the voids necessary to enable satisfactory downward water movement. Of particular concern is the fine material content in the sand (less than 0.25mm) – which ideally should be less than 10%.

Drainage design must be adequate enough to accommodate all water not retained after high intensity rainfall.

False. Only sand pitches can accommodate rainfall of 25mm/hour (considered the maximum expected intensity over a twenty year period). Heavy clay loam soils on pitches permit infiltration of upto 5mm/hour. Even the best maintained 1m spaced slit drained surface will not permit a drainage rate of much in excess of 7mm/hour after continual use – even if regular sand dressings are applied. 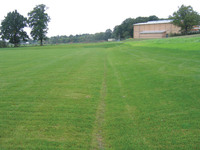 Hence, with rainfall intensity of 25mm in one hour, over half the water volume will be subject to run-off – and this water will simply flow to the lowest areas and off the pitch. In residential areas, with limited or no outfall locations, the solution is the creation of adequate attenuation – this can be achieved in a number of ways with the creation of swales, wetlands and underground temporary storage.

Average daily rainfall in the British Isles varies between 5 and 12mm. With this level of rainfall, even with the soil at field capacity most of the winter, more often than not there is very little surplus water to pass through the drainage system. Surface water is retained in the grass foliage and micro-depressions – and the aggregates within the drainage installation can hold the equivalent of around 4mm of rainfall.

Vertidraining or deep aeration into heavy subsoils will improve the drainage of a sports pitch.

False. When clay loam topsoil and clay subsoil is loosened by aerating and creating holes, this will only create more water retention which will develop into waterlogged areas. The main aim in maintaining heavy loam soils in a condition in which to play football must hinge on retaining a firm surface, with adequate removal of surplus water by means of a suitable by-pass system. Allowing the topsoil to become loose at the onset of winter promotes the development of soft areas that are prone to displacement and the formation of puddles after rain.

A slit drainage system without annual sand dressings is still better than no drainage installation.

False. The system is entirely dependent on the slit drains being ‘open’ at the surface, and the sand topping remaining uncontaminated with surrounding clay topsoil spread with play activity. The only way this can be achieved is by applying sand dressings to create a sandy medium in the shortest period of time to at least 25mm thickness over the slit drains – at least with the application of annual dressings for five years or more. Without these dressings, the drains soon become capped with clay loam topsoil, and the installation cost has become a waste of money.

Read more articles in Consultancy, by Gordon Jaaback or from July 2012.