How to Diagnose a Disease Problem 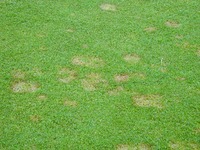 What are those brown patches on the 12th green? Four different people have taken a look and so far you have three different diagnoses.

If it is a disease, you will need to control it. But, what happens if it is not the disease you think it is? Have you wasted time, effort and money on a fungicide that may not provide good control? Is it a disease at all?! Hopefully, the following will help you determine what the problem is, allowing you to determine the best course of action to put it right.

The first mention of a ‘disease’ problem is always the symptoms. ‘Those brown patches’ lead to various guesses as to which disease you are dealing with. It is more constructive to dismiss the symptoms to begin with and start eliminating the diseases that are unlikely, leaving you with only one or two possible culprits to choose from. The symptoms may then lead you to the correct disease.

he weather conditions just before and at the time of the symptom expression can often be paramount in deciding which disease you could be dealing with (Table 1). Microdochium (fusarium) patch (Plate 1) is most common and most damaging under humid, cool conditions found in late autumn and spring. Brown patch (Rhizoctonia) develops under hot, humid conditions during summer months (Plate 2). Although microdochium patches could be mistaken visually for rhizoctonia (brown) patch, the prevailing weather conditions would hopefully lead you in the right direction for diagnosis.

Certain diseases are favoured by highly fertile situations, such as microdochium patch (Table 1). Others, such as dollar spot, are more common in low fertility areas. Therefore, thinking about your fertiliser programme immediately before the disease outbreak may help indicate possible causes. Also the type of fertiliser used can have an effect on potential disease outbreaks.

The potential risk of microdochium patch outbreak following the use of an acidic type fertiliser is less than the potential risk following use of an alkaline type fertiliser. It is even better to also apply iron during the autumn months, which helps reduce the risk of disease outbreak further. Therefore, many of the autumnal style fertilisers will have iron added. However, it is worthwhile to note that you can always find the exception to the rule and both dollar spot and microdochium patch can be found together on one green! (Plate 3).

In the case of red thread, disease control can, at times, be fully achieved by increasing the fertility of the area. A dressing of 8.0.0 (N.P.K) is often all that is required to allow the grass to grow out of the red thread infection. However, in certain circumstances this fertiliser application to control disease may need to be balanced against the ultimate aim for the grass area. If the fertility has been purposely kept low to encourage fescues, which are highly susceptible to red thread, you may not wish to add extra nitrogen for red thread control. Acceptance of the red thread symptoms, which are often visual and may not affect the playability of the turf, in this case may be preferable.

Symptoms can be divided into overall area symptoms (or stand symptoms) and close up symptoms (Table 1).

When dealing with overall symptoms, the size of the area affected is important. ‘Spots’ are small, discrete areas of disease whereas ‘patches’ are larger and all of the plants would generally be affected in the spot or patch. Rings are larger areas where the turf in the middle is not affected (like fairy rings). Remember that discrete disease areas can enlarge and coalesce leaving large areas affected (Plate 4). Irregular swathes may also occur where the disease symptoms are diffuse, affecting individual leaves or plants interspersed with apparently healthy plants (Plate 5).

This is where things can get complicated, as we have to deal with spots, lesions, rots, pustules, perithecia, sporodochia, acervuli, sclerotia and mycelium! Although some of these may be seen by the naked eye, more detail may be revealed using a x10 or x20 hand lens. A leaf spot will be round, usually with a distinct border between the diseased and healthy area.

A lesion is irregularly shaped and may also have a distinct border (Plates 6 and 7). Pustules are formed when spores break through the epidermis and are blister-like spots on the leaf surface (Plate 8). Perithecia are flask-shaped fruiting bodies associated with Gaeumannomyces graminis (causal agent of take-all patch) and are found embedded in the leaf sheaths (Plate 9). Sporodochia are conidial (spore) masses that have been produced asexually allowing rapid spread of the pathogen in favourable weather conditions (Plate 10). Colletotrichum cereale (causal agent of anthracnose) produces acervuli, which are the black saucer-shaped fruiting bodies that contain hair-like setae (Plate 11). These acervuli are often used to determine anthracnose infections before other symptoms, such as the basal rot, occur (Plate 12). Sclerotia are the resting bodies of certain fungi, such as the red threads produced by Laetisaria fuciformis (Plate 13). Myelium is the mass of hyphae that makes up the body of the fungus. The presence of any of these signs is what may conclusively define the pathogen that you are dealing with.

A new green has developed a faint ring pattern (Plate 14). The turf is a nine-month old Agrostis spp. sward. It is July and the weather has been warm and dry. What is the disease?

It is summer (warm and dry), so you can eliminate microdochium patch. The symptoms are a ring pattern, so you can eliminate dollar spot. The grass is tuning a brown colour, so that removes red thread too. We are left with Rhizoctonia and take-all patch to consider. Both affect Agrostis spp; both can cause circular patches; both occur in the summer time. We have no information on the humidity levels so we need to look for close up symptoms to distinguish between them.

Closer inspection reveals blackened roots and perithecia embedded in the leaf sheaths of the affected plants. Therefore, we can conclude that it is take-all patch. The disease has not caused extensive damage yet and applying azoxystrobin (Heritage, which has label recommendation for the control of take-all patch) at this stage should control the infection before extensive damage becomes visible. Culturally, applying manganese and iron sulphate may also help reduce the infection.

However, in some cases following through the steps may still not lead you to a diagnosis. Where this happens, ring me and we will discuss!