This article appeared in Pitchcare Magazine 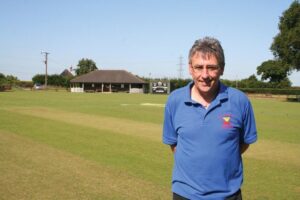 When people ask me how I came to be groundsman at Great Melton Cricket Club I must confess I really have no idea. I must have stuck my hand up during a moment of madness at an AGM in 1992, and my fellow club members duly voted me in before I had time to change my mind.

As I was the only club member actually living in the village, and coming from a farming background, they assumed, rather misguidedly, that working on the land and preparing cricket pitches had some sort of connection, and being ‘Johnny-on-the-spot’ was an added bonus.

The square I inherited in the glorious setting of the ruined Great Melton Hall grounds was, at the time, a rather sad-looking thing that had been laid in 1991 by our extremely enthusiastic and cricket-mad patron and landlord, Sir Edward Evans-Loombe, as part of an agreement my late father had made with him on giving up the tenancy to his small farm in the village.

This had fulfilled a life long ambition for our club to have its own ground as, prior to that, we had a nomadic existence playing our home matches at various locations since the club’s formation in 1974. The 9-strip square did ‘resemble’ a cricket pitch after the hard work of my predecessor and his group of willing volunteers, including myself.

But, ‘resembling’ one was about all you could say as many a batsman could vouch for in that first summer of 1993 as they trudged off, their stumps shattered or their toes bruised, by yet another grubber. 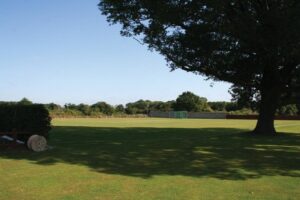 Oh for websites and magazines like Pitchcare in those early days! Their help would have been invaluable.

We had to rely on books and, wherever possible, questioning our fellow groundsmen on our travels to matches, to gain knowledge and help. I say ‘we’ because, throughout my time as groundsman, I have been assisted by another club stalwart, Grenville Ireland, without whose help the job would be impossible. It also helps to have an understanding wife who accepts lots of lonely hours during the cricket season – sorry Ness.

The turning point came when a club member loaned us the money to buy an old Aveling & Barford roller that was originally a two man job to start, but something I mastered in time after a lot of swearing and cranking, especially on those cold, pre-season, March mornings.

In hindsight it was too heavy for the purpose, but beggars couldn’t be choosers and, with this beast, we started to be able to prepare surfaces that were at least flat! Coupled with that, we also had a deal with one of our vice presidents, and owner of a local golf course, for a set of power driven Atco gang mowers that we still use to this day, and pull behind my father’s old David Browne 880 tractor, and this enabled us to improve our outfield considerably. No more waiting for the council to cut the grass or finding them cutting it on Tuesday so, by the time the weekend arrived, it was nearly up to your knees. 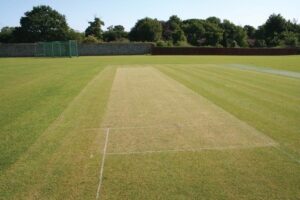 For most of the time, up until his death in 2007, my father, who was by then retired, cut the outfield, built our sightscreens and was generally our handy man. His loss to the club was immense, and I have to confess my first few rounds on the mowers as a new season dawns still brings a lump to my throat.

During the course of the next few years our end of season renovations and pre-season work became better as the knowledge increased. And, as the cricket club grew, so did our ability to buy better machinery. This culminated in 2007, when the club was designated a Focus club with full Clubmark accreditation.

This enabled us to gain a Community Club Development Grant to have a junior pitch (U11 and U13) added to the ground with a professionally laid 3-strip square, a renovation to our net area, a 1.5 ton Autoroller and a Dennis cassette mower.

It’s a real bonus, after all the years using begged and borrowed equipment, to be able to unlock the doors of our lock up and use decent equipment. But, despite all that, I’m convinced I personally spend more time working on the ground than I ever did. 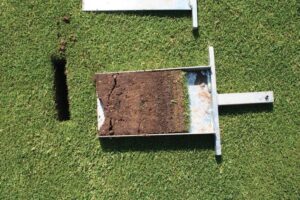 The saying ‘ignorance is bliss’ perhaps rings true; the greater your understanding of how it should be done the more time you spend trying to achieve it, which can prove challenging when also in full time employment.

During the months of May to August the ground is heavily used by our junior teams, ranging from U11 to U17, and four senior Saturday sides (two of which play on hired pitches), a Sunday and a midweek side, the occasional Norfolk CC junior county match and various touring teams.

We try to arrange fixtures to avoid Tuesday and Friday evenings, which allows time for pitch prep and repair work. However, there is still no chance of a peaceful night as Tuesday is senior practice and Friday is Junior coaching, where we get around seventy to eighty children each week. 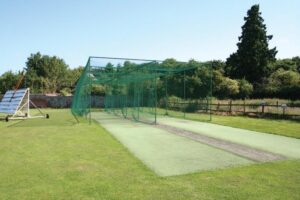 As to the hours spent on this labour of love? I hate to think. But, in common with hundreds of other volunteers like me across the country, the real reward is playing or watching cricket being played on a good surface prepared to the best of our ability.

Some of us older members can remember the early days at Melton Park when a league score of 120 would have been considered testing but, these days, you would need to double that to stand any chance.

There are times when you feel the pressure, and wonder why you do it. But, I just have to walk out onto the beautiful setting of Great Melton Park early on a sunny Saturday morning, when the birds are singing and the breeze is rustling the leaves on our resident oak tree, with the prospect of a good afternoon’s cricket ahead, and I soon realise just how worthwhile it all is.